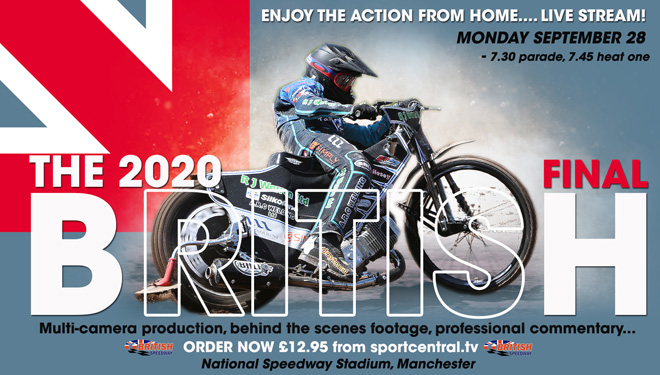 SPEEDWAY bosses have taken the decision to put back Saturday’s British Final 48-hours – and it will now take place at the National Speedway Stadium in Manchester on Monday evening (7.45pm)

Ipswich promoter Chris Louis has revealed how he cannot guarantee the Foxhall track will be ready after rain for the last three days and more forecast throughout Saturday.

And following the huge success of Belle Vue’s streamed event on Thursday night, the Aces have stepped forward to host the showpiece meeting on Monday night.

British Speedway Promoters Ltd Vice Chairman Damien Bates said: “It’s extremely disappointing for Chris and Ipswich as a club to miss out on the meeting, it’s been a stressful and time consuming exercise for him to put this on.

“As a board we are all agreed on putting this event on. Everything that has been against us will be overcome. We are taking a financial risk with no fans and we wanted to give the meeting the very best chance to go ahead. We thank Belle Vue for their co-operation and support.”

Chris Louis added: “Everything has been against us and the weather was the final nail. It’s a showpiece event with an online audience and we want it to be spot on.

“By moving to Belle Vue on Monday with a good weather forecast this gives us that opportunity. It’s a great disappointment for Ipswich Speedway but we are right behind the event and want it to be a big success in these testing times.”

Monday’s British Final is available to be streamed live at sportcentral.tv for £12.95.

Message from the top