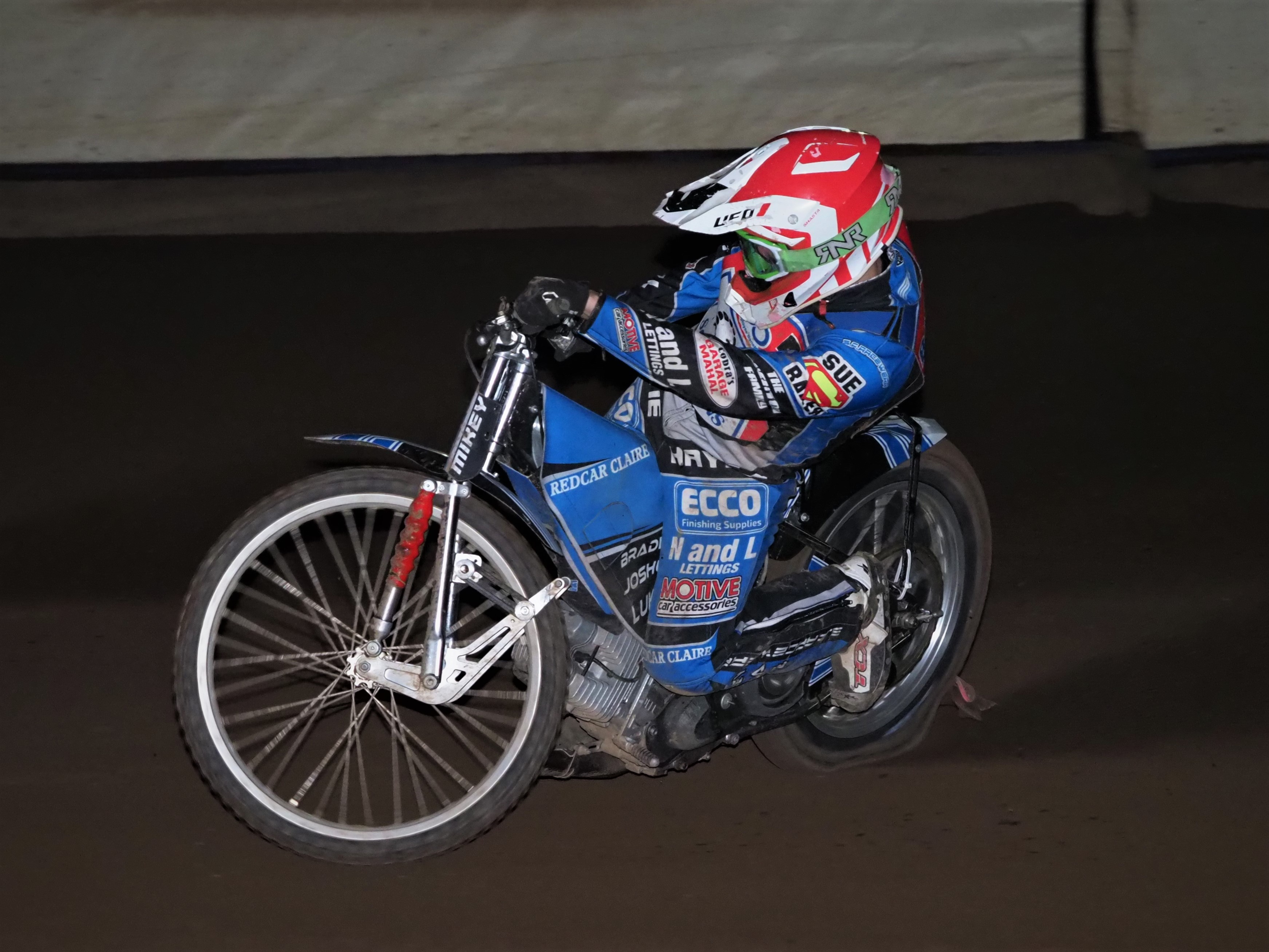 HEB Scunthorpe Scorpions didn’t quite make it two away wins on the bounce – but did pick up two valuable league points by taking a 45-45 draw at Birmingham’s Perry Barr stadium last night (Wednesday).

With Ben Barker reveling in a visit to his former home track, Scorpions were just a few points behind for much of the evening. They had led 10-8 after three races, while Brummies’ lead was briefly six points after Heat 6.

Heat 13 ended up as a 3-3, after Josh Auty fended off Brummies’ guest Steve Worrall for second place, and Jake Allen flew around Worrall on the third lap.

Barker made it four wins out of four in Heat 14, while Simon Lambert saw off the Brummies’ pair to join his team-mate for a 5-1, to level up the scores at 42-42 going into the final race.

In Heat 15, Allen edged in front of Tero Aarnio and Adam Ellis, and then Barker pounced around the outside and together with Allen, they fought off Aarnio to end the opening lap in a 5-1 position.

However, Aarnio found some extra drive and shot inside both Scorpions on the back straight of the second lap, and the Finn resisted Barker’s attempts to get back through, to inflict the only defeat of the night on the flying Cornishman.

As with many of Scorpions’ recent matches, the role of Lambert at reserve was pivotal, and he scored 12+2 from seven rides.

Scorpions could also point to one moment of misfortune when Allen suffered an engine failure on the second bend of Heat 4, while he was leading the race.

The rain was spitting around for most of the night, and there was a quick rain shower before Heat 9.

While passing was at a premium, Auty burst around Paco Castagna on the final bend of Heat 5 to snatch second, while Worrall found a way around Stefan Nielsen in Heat 7.

An odd quirk is that all six Scorpions ended up with a warning for moving at the tapes. In all, nine out of 13 riders received a warning, with Auty and Aarnio being penalised for touching the tapes during the evening.

The result consolidates Scorpions’ sixth place in the Championship table.

Scorpions’ team manager Dave Peet said: “We were very close to a win at Birmingham, but a draw is still a good result and earns us a couple of league points.

“Ben Barker had won off every gate, so we gave Jake Allen the better gate in Heat 15. It nearly worked because Jake got his nose in front and then Ben came around the outside, and we were holding a 5-1 match-winning position.

“I’m not quite sure where the burst of speed from Tero Aarnio came from, but it was enough for Birmingham to grab a draw.

“A few of the lads haven’t been there for a while, while we had the distraction of rain in the middle of the meeting, so all-in-all, we’ve done exceptionally well to take the draw, especially after being behind for most of the night.

“I’m pleased how we’ve bounced back from the home defeat from Leicester last Friday and taken six points from our two away meetings at Glasgow and Birmingham.

“That victory at Glasgow has spurred us on to want to finish the season in style.

“If we finish with a win over Redcar in our home meeting on Sunday, then we will finish in a respectable mid-table position.”

* HEB Scunthorpe Scorpions have just one meeting left in 2019 – a home clash with Redcar Bears at the Eddie Wright Raceway on Sunday (5pm). Former Scorpion Ryan Douglas has been booked by Bears to guest in place of Charles Wright, who is ruled out with concussion.