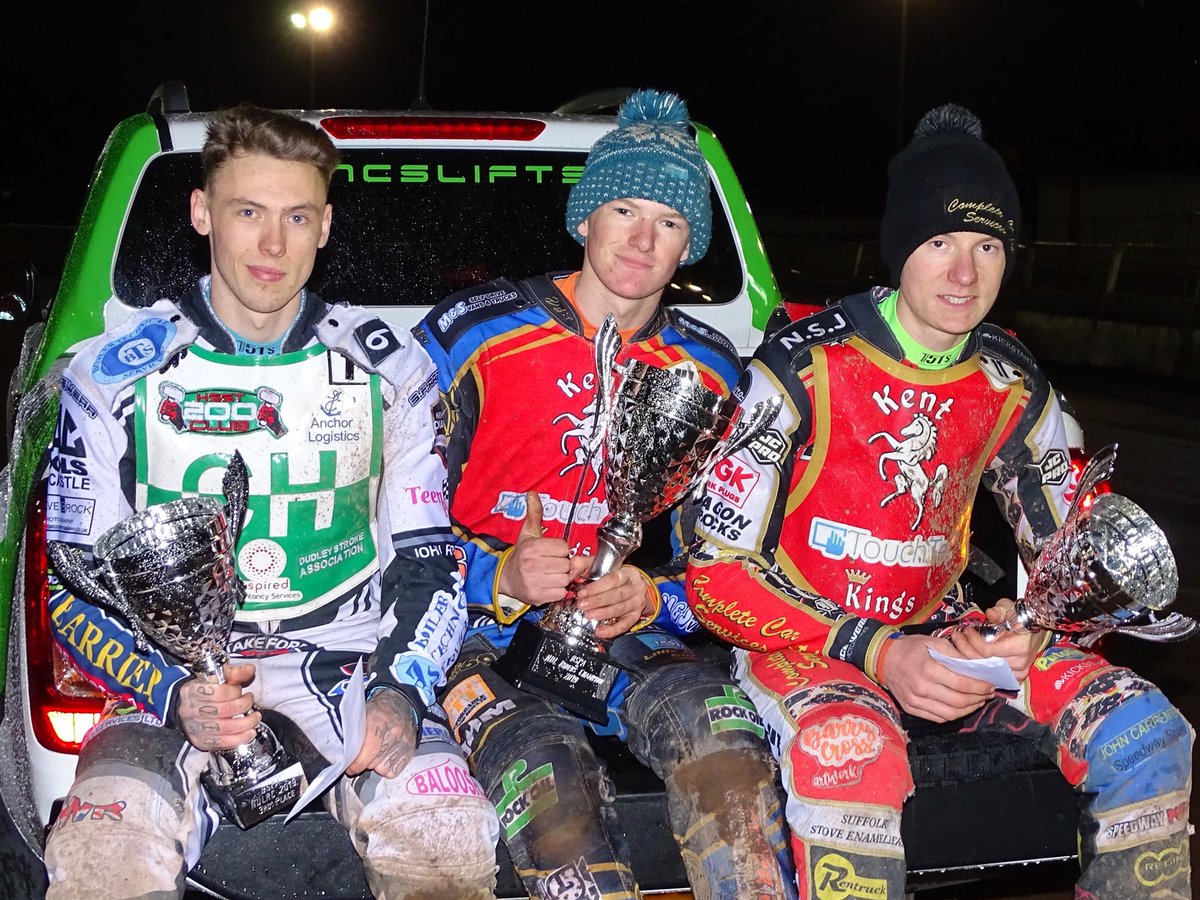 The weather forecasts suggested a dry day, but the reality was very different. There was rain in the afternoon at around 3pm, which briefly turned heavy.

That rain thankfully had stopped by 4pm, but a heavy shower then arrived at around 6.30pm, resulting in the abandonment of the meeting after 14 races.

However, the meeting had progressed far enough to be declared and it meant the event was finally resolved at the third time of asking – after previous rain-offs at Leicester and Scunthorpe.

Due to the abandonment, the rules stated that the result was called after Heat 12, at which point each rider had taken three rides apiece. At that point, Rowe was the only unbeaten rider, and therefore he was declared the meeting winner.

Drew Kemp and Max Clegg both scored eight points, with Kemp taking second place by virtue of his victory over Clegg in Heat 7, as Kent completed a one-two in the final standings.

Ex-Scunthorpe rider Clegg, representing Cradley, can count himself particularly unlucky as he had ended Rowe’s unbeaten run in Heat 13, only for that race to be ‘voided’ by the abandonment. Rowe, Clegg and Kemp all had 11 points after four rides, with Clegg due to feature in Heat 18, while Rowe and Kemp would have faced pre-meeting favourite Ellis Perks and defending champion Ben Morley in a very tricky Heat 20.

But that’s taking nothing away from Rowe, who rode with great dash to take his three heat victories to add his name to the list of winners of the prestigious NLRC – a list that includes three-time World Champion Tai Woffinden.

In particular, there was a lovely cut-back by Rowe on the back straight of Heat 11, to get the better of Jordan Palin and Jason Edwards.

15-year-old Palin – who has been promised a reserve berth with Scunthorpe Scorpions in 2020 – got off to a nervy start, but he was grew in stature with each race completed, despite riding against competitors with greater experience.

As usual, there was some terrific racing around the Eddie Wright Raceway. Perhaps the pick of the crop was Ryan Kinsley’s victory over Perks in Heat 5, as the Mildenhall representative – who, of course, has also ridden for the HEB Scunthorpe Scorpions in 2019 – bravely squeezed past Perks and the fence on the back straight of lap 3, and then Kinsley held firm when Perks charged level on his inside on the third bend of the final lap.

But both Leon Flint and Kemp also charged from third to first to win races, while nearly every race featured at least one overtake.

There were two attempts to stage Heat 15. The first was an unsatisfactory start, while the second saw a coming together between Jordan Palin and Jack Smith on the second bend, which resulted in a nasty-looking accident, with Smith needing treatment. The rain then arrived, and it soon became apparent that the meeting could go no further.

Scunthorpe promoter Rob Godfrey said: “It’s a big shame that the rain couldn’t have held off for another 30 minutes, because it was building up into a cracking meeting.

“But Anders Rowe was a deserving winner as he once again demonstrated how well he can ride around the Eddie Wright Raceway, while I thank all the riders in the meeting for putting on such an entertaining show.”

The NLRC concluded the season of professional speedway racing at Scunthorpe, although amateur speedway will continue at the venue throughout the winter. The conclusion of the summer series also took place at the EWR yesterday (from 11am to 2.15pm), and a 47-race programme concluded with a fine victory for Tom Spencer in the Open Class, as he raced from last to first in an enthralling final.