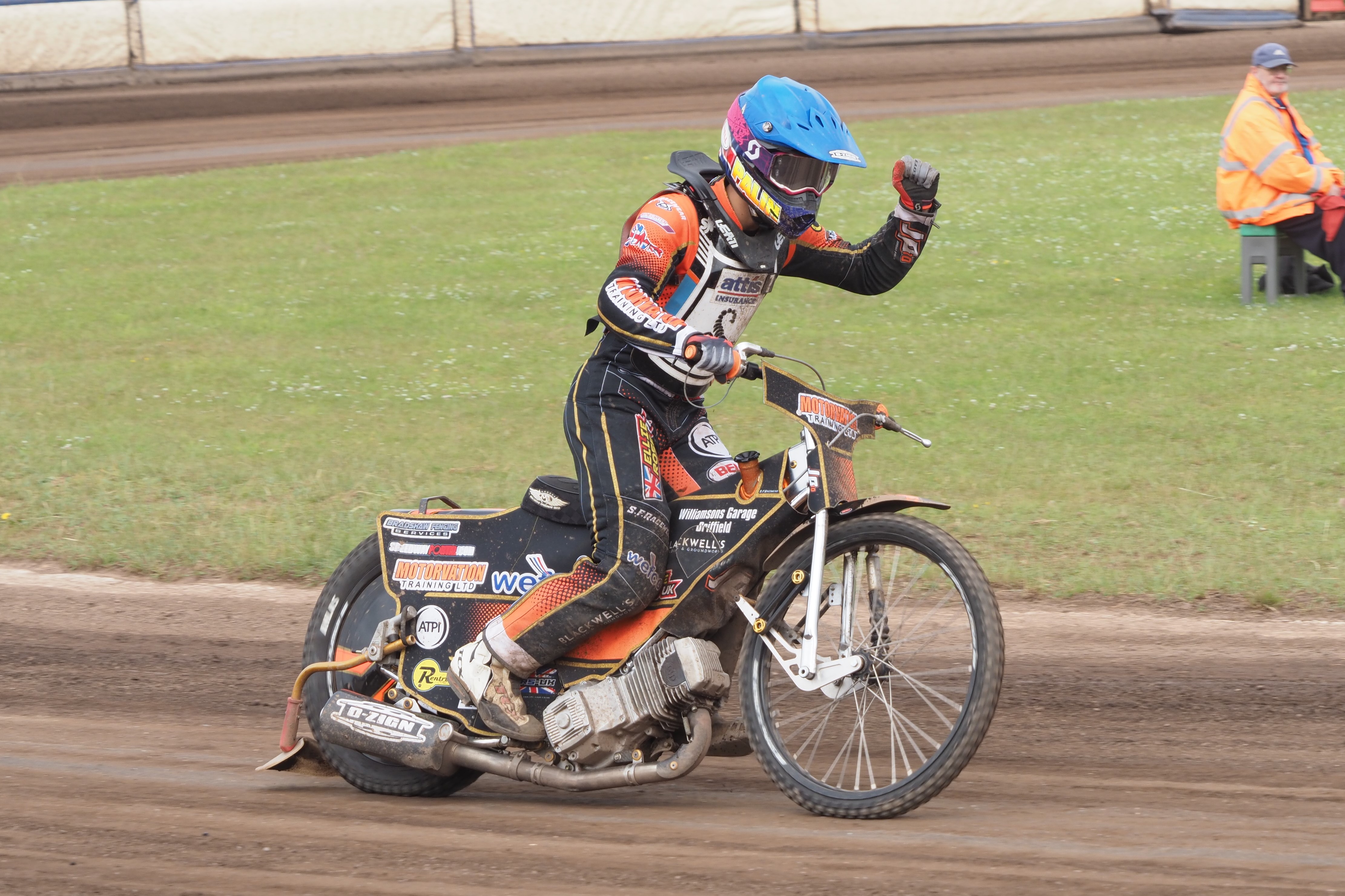 ATTIS INSURANCE Scunthorpe Scorpions maintained their second place in the Championship table with a superb 54-36 victory over the previously unbeaten Edinburgh Monarchs at the Eddie Wright Raceway yesterday afternoon (Sunday).

A key factor in Scorpions’ success was a fantastic performance from Jordan Palin, who scored 16+2 from the No 7 berth, despite only having three hours sleep the previous night.

The 17-year-old qualified for the final of the European Under-19 Championship, after finishing fourth on 12 points in his semi-final in Divisov, Czech Republic on Saturday, before dashing back to ride for Scorpions yesterday.

Fellow reserve Josh MacDonald crashed out of the meeting in Heat 7, after a heavy impact with the fence. It left the Australian with a hand injury and he pulled out of the rest of proceedings, although he is expected to be fit for the clash with Berwick at the EWR this Friday.

From the moment he pulled out, it became apparent Palin would need to take the maximum seven rides allowed for a reserve rider, to cover both his own and MacDonald’s riders. And he did it in style, beating two of Monarchs’ heat-leaders: Sam Masters (in Heat 11) and Josh Pickering (in Heat 14).

The latter race was Palin’s final outing and his best. He and Tero Aarnio hit the front, but Pickering came flying through the middle of them after a lap. His momentum took him wide and both Palin and then Aarnio pushed him back into third. Pickering went back past Aarnio and then the Australian powered around Palin on the back straight of the final lap. But Palin wasn’t beaten and surged back inside Pickering coming out of the final bend to take a brilliant victory and complete his memorable afternoon.

While Palin grabbed the headlines, it certainly wasn’t a one-man show for Scorpions. Ulrich Ostergaard was a lively and forceful guest and dropped just a single point, while Aarnio, Theo Pijper and Simon Lambert rattled up the points.

New No 1 Adam Ellis’ home debut started an engine failure in Heat 1, but he showed what he could by winning a superb battle over Pickering in Heat 10 – one of only two dropped points for the flying Australian.

It was second successive Sunday afternoon of some quite superlative speedway at the North Lincolnshire circuit. It’s true a bit of dust was flying by the end of the meeting, but the action was still top notch.

The meeting concluded in an incredible Heat 15 where all four riders were jockeying for position. Aarnio battled through to join Ellis at the front, and Scorpions briefly held a 5-1, but Pickering and Richie Worrall then battled past Ellis, while Pickering eventually took the race win after a photo finish with Aarnio.

Speaking post-match, Scorpions’ top-scorer Jordan Palin said: “I certainly didn’t expect to win as many races as I did, while it was a very good team performance because Edinburgh are a strong team on paper.

“After Josh (MacDonald) pulled out and I had to take the seven rides, the whole thing merged together really. I was just trying to take it race-by-race, keep calm and keep on doing what I was doing.

“I wasn’t aware how many points I was scoring as the meeting was going along, although now the meeting is over, I know I got my personal best score. It’s now just a case of trying to keep the ball rolling. I’m going to keep my feet on the ground and try to stay consistent which is what I want.

“I had about three hours’ sleep last night. We landed in Stansted at around 7.30am this morning. I made sure I didn’t sleep on the way here, because that would have just made it harder in focusing on the meeting. Once we got here, my grandad was here ready with my bikes.

“It’s been a really good weekend for me – I had a good meeting in Czecho to qualify for the (European Under-19) final and I’m over the moon at how it went today.”

* LUKE HARRISON (250cc) and Ben Trigger (500cc) were the winners in Round 3 of the British Youth Championship that followed the Scunthorpe v Edinburgh clash.

* ATTIS INSURANCE Scunthorpe Scorpions are back in the action at the Eddie Wright Raceway this Friday (July 2) at 7.30pm, when Berwick are the visitors.