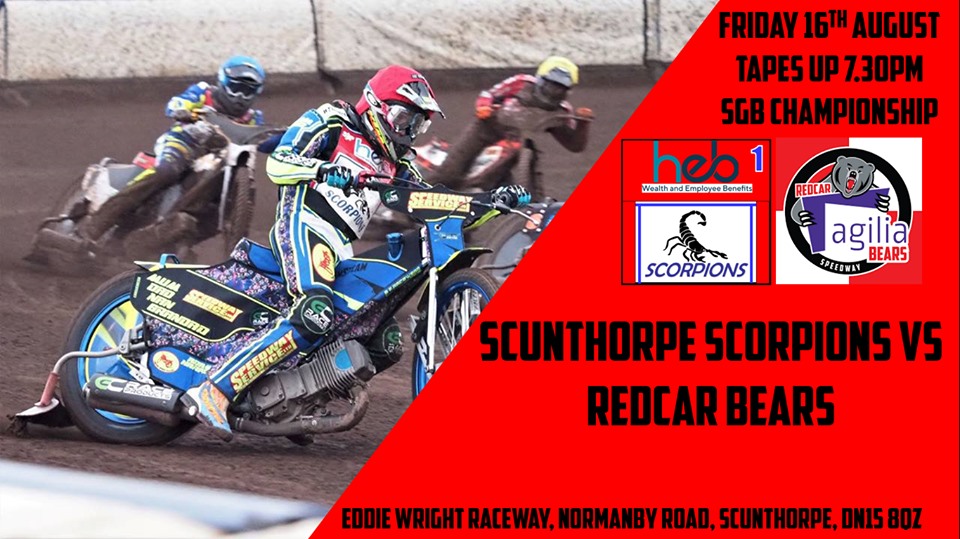 * Please note that this meeting has been rained off *

MOUTHWATERING FIXTURE AHEAD AT THE EDDIE WRIGHT RACEWAY

BRITISH CHAMPION Charles Wright will visit the Eddie Wright Raceway on Friday evening (7.30pm), as the HEB Scunthorpe Scorpions host Redcar Bears in a clash which promoter Rob Godfrey is hailing as: “one of the matches of the season.”

Scorpions will use rider replacement in place of broken leg victim Danny Ayres.

The 32-year-old rider from Suffolk suffered his injury in a National League clash at Mildenhall on Sunday, after another rider fell in front of him. Ayres had an operation on his broken left tibia on Monday and will be ruled out for the rest of the season.

Godfrey is believed to be seeking a replacement, who hopefully will be in place for next week’s fixtures.

Scunthorpe took an excellent 47-43 victory at Redcar five weeks ago, on a night that Bears were below strength.

Godfrey said: “It’s going to be an absolute corker on Friday – it promises to one of the matches of the season at the Eddie Wright Raceway.

“Redcar will be thirsting for revenge, after we won at their place, while we will be out to complete our first double of the season.

“Bears are a team on form, and they’ll be a tough nut to crack, but if we ride to our abilities, we are capable of taking the three points.

“Charles Wright is naturally on a high, after he deservedly won the British Final at Belle Vue a couple of weeks ago, while our lads will be keen to put one over the new British Champion.

“Add in the likes of Erik Riss and Michael Palm Toft, battling against our boys, and you can see what a brilliant meeting it could be.”

The meeting is now Scorpions’ only fixture of the week, after their clash at Birmingham today (Wednesday) fell victim to the weather.