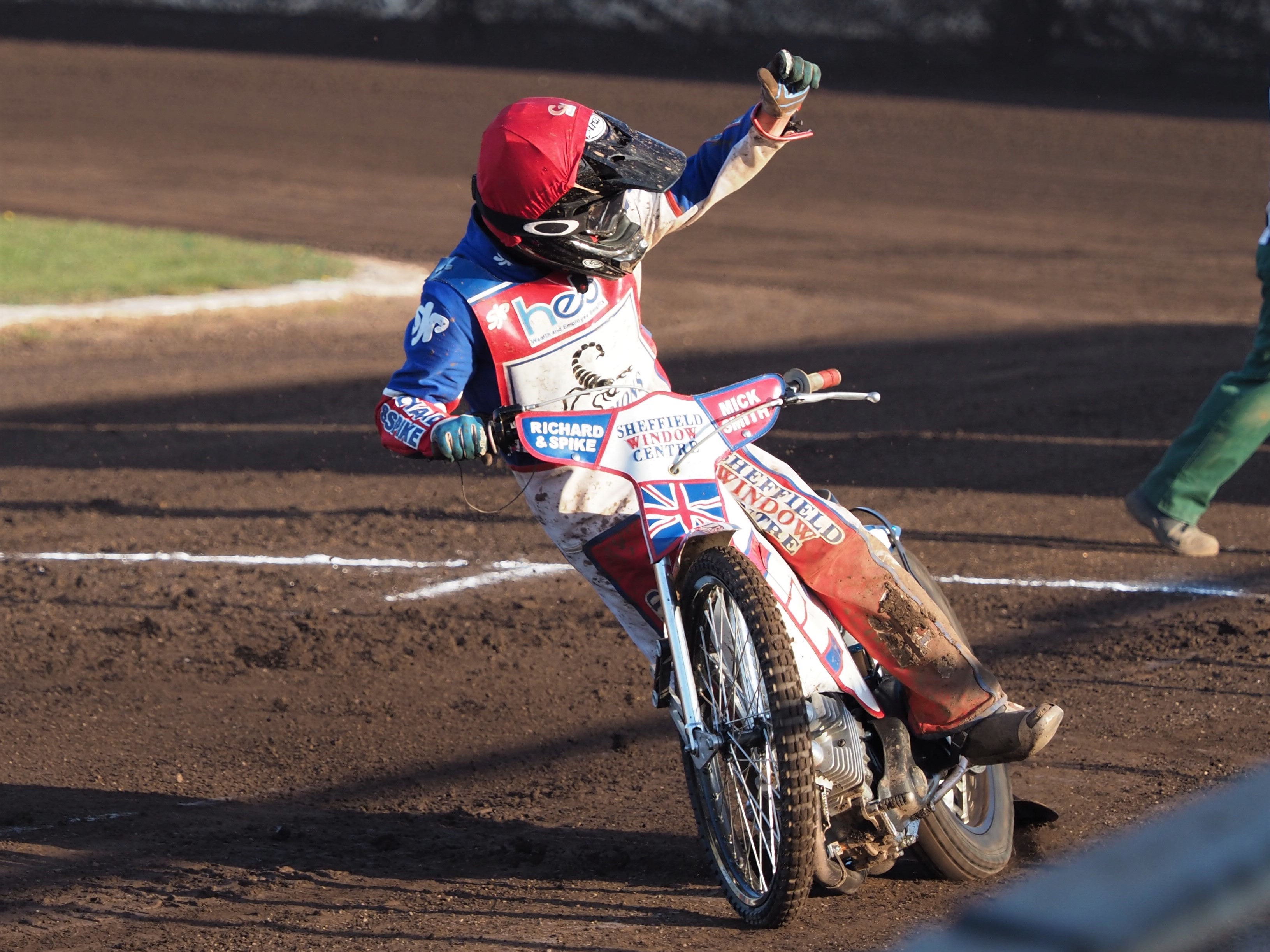 ALL seven members of the HEB Scunthorpe Scorpions took at least one race win apiece, as they defeated local rivals Sheffield Tigers by 50-40 in a thrilling meeting at the Eddie Wright Raceway yesterday (Good Friday).

Recent signing Danny Ayres scored his first win for the club by taking Heat 1, defeating former British Champion Danny King, while Scorpions are looking much stronger at reserve this season, and Ryan Kinsley and Josh Bailey bagged a 5-1 from Heat 2 for the second time in five days.

Sheffield came back level to 12-12 after four races, but Scorpions edged back-in-front, while a real key moment was back-to-back 5-1s in Heats 9 and 10, which left Scorpions 35-25 ahead.

Tigers placed Kyle Howarth into Heat 11 as a tactical substitute, but Jake Allen passed him in the closing stages to snatch second place, behind King, to prevent a Sheffield 5-1.

Scunthorpe clinched victory with a 4-2 in Heat 14, with Stefan Nielsen winning the race, while Kinsley took a battling third which nearly saw him overtake Ty Proctor at the death.

Sheffield could have nicked a point with a 5-1 in Heat 15, but both Josh Auty and Jason Garrity overtook Zaine Kennedy in an absorbing race to ensure the Tigers left with no reward for their efforts.

Scunthorpe skipper Garrity (pictured) recovered being put back 15-metres for touching the tapes in a pointless opening race, to record three wins in his next three outings and top score for Scorpions with 10+1.

Auty became the first-ever Scorpion to surpass the 3000-point mark with the club after winning his third outing and he contributed 10 points.

Speaking post-meeting, Scorpions’ team manager Dave Peet said: “It was a brilliant performance from the lads from No 1 to No 7 and I can’t ask for any more that.

“We know how good our top four are around Scunthorpe, but the difference this season is that they’ve got support. It’s always nice when every rider in the team wins a race and we had that against Sheffield.

“Our two reserves scored 9 paid 10 and outscored Sheffield’s reserves, while Danny Ayres has settled in quickly and but for his fall while challenging for a paid win in Heat 8, he could have ended up with paid 11. Even so, paid 8 is a fine return, and when, in Heat 1, Josh Auty got filled in, it didn’t matter so much, because Danny won the race.

“That’s the good thing about this team – there’s someone there to come through and score the points if we suffer that little bit of misfortune.

“The change in riding order has paid off, because we shared Heat 8 and could have even ended up with a 5-1 from that one, and then took a 4-2 in Heat 14.

“Full credit to Josh Auty on passing 3000 points with Scorpions. It shows what a superb job he’s done over the years for the club.”

* HEB Scunthorpe Scorpions are back in action at the Eddie Wright Raceway next Friday (April 26), when Redcar are the visitors in further Championship Shield action.