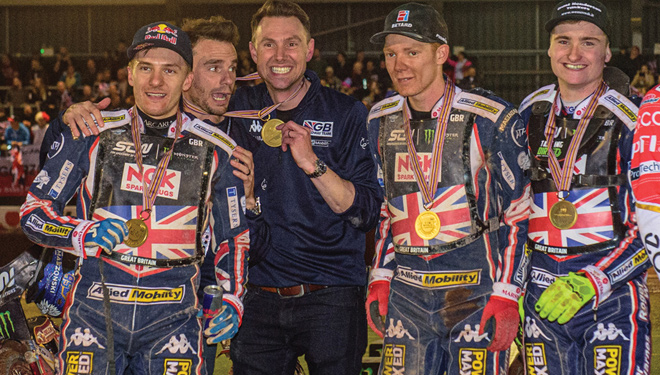 GREAT Britain’s speedway team are world champions – for the first time since 1989.

Youngsters Robert Lambert and Dan Bewley, both products of British Speedway’s National Development League, raced to victory in a dramatic grand final shootout against Poland in the Monster Energy FIM Speedway of Nations at a sold out National Speedway Stadium in Manchester.

Belle Vue racer Bewley was in for injured triple world champion Tai Woffinden who had crashed out of Day 1 of the final on Saturday. Under-21 rider Tom Brennan was unbeaten in both his rides across the two days and the points scored by both Woffinden and Brennan were also instrumental in the British success.

After coming through the last chance race-off against Denmark, Lambert and Bewley knew avoiding last last place in the final would hand them the world title.

From the tapes, it was Bewley trailing from the unfavourable outside gate, as Bartosz Zmarzlik made the best start. But the key were the minor positions, and the British boys pressured the Poles into a mistake and Maciej Janowski fell on the fourth bend, as Great Britain took a decisive 5-4.

The last time GB struck gold was in the World Team Cup Final in 1989 when none of this year’s winning team were born.

British Speedway Chairman Rob Godfrey said: “On behalf of the Board of directors of British Speedway Promoters Ltd, I would like to offer our sincere congratulations to the GB speedway team for this magnificent achievement.

“All four riders who represented our nation this weekend are products of our National Development League and have come through the leagues at Championship and Premiership level.

“After what has been a challenging two years for British Speedway, this is a fantastic boost for the sport and we couldn’t be more proud.

“We congratulate the management and the backroom team in the GB organisation and they can, to a person, all feel extremely proud.”

Lambert, meanwhile, says he will remember the winning moment for the rest of his life.

He said: “We have had a hard weekend with Tai getting injured. But obviously we had a strong guy to come into the team in Dan.

“I was born in 1998. It’s the first time in my lifetime that I have seen Great Britain as world champions, apart from Woffy being a world champion as an individual.

“It’s a great feeling and I am going to treasure this gold medal for as long as I live.

“We did it with such a young team as well. Me and Dan went out and did the business in the last race at such a high level against the two best Poles in the world. It’s such a great feeling for us and also GB. I am very, very proud of everyone involved.”